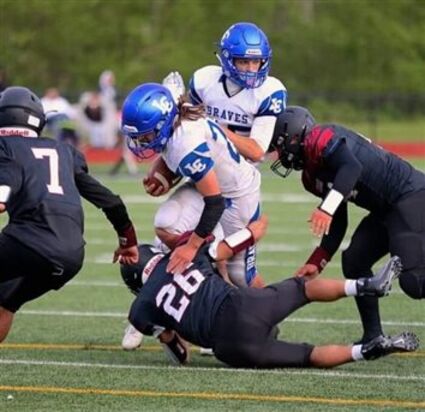 STATING HIS CASE – Kali Adams, with ball, was only stopped by three defenders. He was named the WIAA 2B Football Player of the Week after scoring twice and topping 100 yards rushing in La Conner’s 41-0 season-ending win at Darrington. The sophomore running back, a key player for the NW2B champion Braves, was tabbed for the statewide honor based on his performance and leadership. – Photo courtesy of La Conner School District

La Conner’s Kali Adams wowed fans by rushing for more than 100 yards and two touchdowns in the Braves’ 41-0 shutout win at Darrington in the team’s season finale.

The sophomore running back impressed state athletics officials as well.

As a result, Adams was named the Washington Interscholastic Activities Association (WIAA) 2B football player of the week Thursday.

Each week the WIAA, which governs school athletics and activities in the state, joins the Gesa Credit Union in recognizing student-athletes for outstanding performances and important contributions in their communities.