Rain and wind like you would not believe hit California 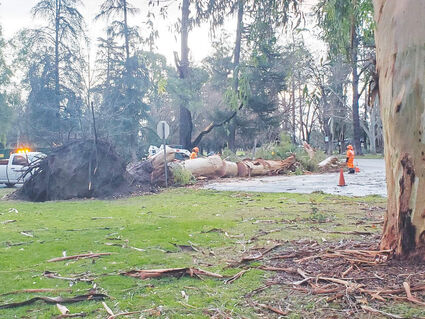 CITY OF TREES LOST A LOT OF THEM – William Land Park is Sacramento's largest city park and two blocks from the writer's mother's home. At least three-dozen trees, like this eucalyptus, came down in the Jan. 6 storm.

In the first three weeks of January, 32 trillion gallons of rain and snow fell on California.

I was there for an awful lot of them.

Usually, when I make my holiday sojourn to Sacramento, I enjoy slightly warmer temperatures and a whole lot more sun than I get in Skagit County in the winter.

Rain began just a few days after I pulled up to my mom's house on Dec. 19. At first, it was refreshing and from what I saw on my drive south, badly needed. But one storm turned into one atmospheric river after another and New Year's Eve brought high winds. Around 8 p.m. we heard an exp...