First we froze; then we flooded 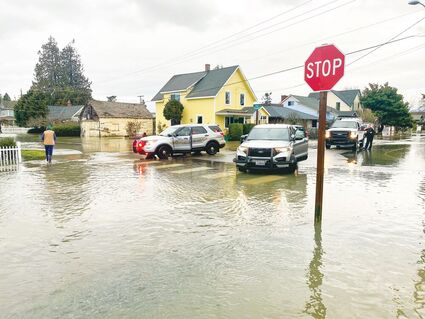 WATER EVERYWHERE – Tuesday morning tide waters came up from the Swinomish Channel into town. This was the scene at 9 a.m. on Center and Third Streets. Sheriff's deputies blocked off the streets and evacuated residents.

They dealt with all those in the last few days alone.

A fierce winter storm that brought up to nine inches of snow was followed by record low temperatures making for hazardous travel and then rapid melting marked a wild weather week leading up through Christmas Day when Lease & Co. remained on call.

Public works staff rolled out before daylight the morning the deepest snowfall arrived, Dec. 20. The steep east side of Washington Street, known for decades as Whitney Hill, was closed to traffic and transformed into a sledding paradise for kids of all ages. Major arterials and intersections were plowed and sanded and sidewalks shoveled.

Crews with The Port of Skagit followed a similar game plan at La Conner Marina.

Everyone morphed into holiday mode. Then came plunging temperatures, dipping into the sub-teens.

Tony Pena, part of the public works team that had installed the Town Christmas tree at Gilkey Square, said Thursday morning – when 11 degreesT registered on the thermometer – was the coldest day he could remember on the job. As he drove a department rig on South Third Street toward Pioneer Park, Pena witnessed what could be described as icicles on steroids on homes in the area.

Despite the frigid air and slick surfaces, not everything came to a standstill. At least not right away.

As Pena made his rounds, a lone jogger looped town, striding carefully in the direction of Conner Waterfront Park. By day's end, though, it would be too treacherous to walk, let alone run or drive. Motorists reported icy road conditions throughout the area as being the worst in recent – and even long-term – memory.

For stores and offices that remained open, commuters had to be resourceful. While picking up an order at The Slider Café, Robyn Burdick, co-owner of Tillinghast Postal & Business Ce‑nter, related how a Guemes Island resident had gotten to work in Anacortes that morning by hitching a ride on a mail truck making the ferry crossing.

Closer to home, residents of the Skagit Beach area noted the highly unusual sight of ice floating on Swinomish Channel.

"We were closed yesterday," said La Conner Pub & Eatery owner Julie Lennartz, whose family has owned the First Street business for a half-century, "but we're open today for a little while for the Seahawks game."

The severe weather earlier in the week forced cancelation of the high school basketball games, the Town planning commission meeting and last Friday's garbage pickup. Waste Management staff said they will double up this week and collect recyclables on Jan. 6.

Undaunted, kids carrying sledding gear made their way back and forth between home and the hill while the snow lasted.

La Conner-Swinomish Library Board member Robert Hancock, among the parents who gathered with their kids atop Washington Street, said he remembered occasional times growing up here when temperatures hovered in the teens but never days that flirted with single digits.

During the coldest stretch, there were several examples of heartwarming kindnesses extended between neighbors, from shoveling driveways and sidewalks for one another to jumping dead batteries and aiding drivers stuck in the snow or unable to gain traction on ice.

Toby Walls, a local marathoner who works at La Conner Schools, did his part clearing snow in front of First Street businesses while his wife, Sarah, a professional photographer who frequently contributes to the Weekly News, took pictures of the wintry scene. 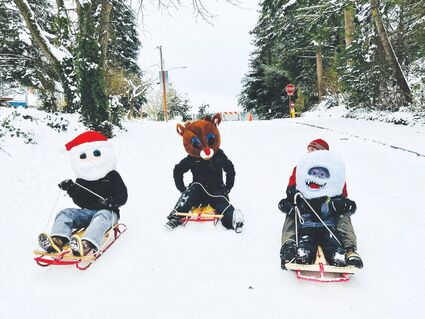 Within days, it was a completely different look along La Conner's waterfront. Rain and southerly winds replaced snow and ice. Seasonal king tides brought high water along the shoreline.

The Sherman Street boat launch beneath Rainbow Bridge was completely submerged early Monday morning – a Christmas holiday for Town staff– and water rose atop nearby riprap.

By mid-morning, nature had reversed course and water started to recede, much as the usual ebb-and-flow of life returned to La Conner. Downtown traffic increased; joggers and dogwalkers reappeared, often in groups; stores re-opened and shoppers peered into windows looking for day-after-Christmas bargains.

But, as Lease will tell you, there's still 12 weeks of winter to go.

And the National Weather Service estimated up to two inches of rain could fall this week through tonight.