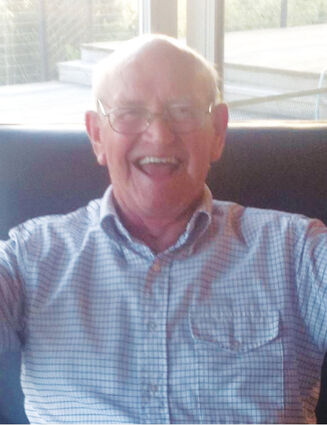 James Roger (Jim) Zimmerman was born June 26, 1933 in Noonan, ND to Edgar and Stella (Kjos) Zimmerman and passed away December 12, 2022. In 1936 the family, with siblings Eloise and Boyd, headed west, starting a new life in LaConner, WA. Jim graduated in 1951 from LaConner High School and went to work on the tugboats for Dunlap Towing Company. In 1963 Jim and 19 co-workers purchased the Company from Gene Dunlap and he spent the next 30 years in a management role until he retired in 1992.

In 1951 he married Mary Ann Peth and together they raised 3 children, Tommy, Annie & Nancy in LaConner until her death in 1972. In 1973 Jim married Margery Dunlap and gained two daughters, Laura and Alison. They spent nearly 50 years together, traveling mostly by car. Road trips to remote places in USA were their favorite destinations. Together they built their dream home at Bayview, watching endless sunsets and tending to their gardens. He loved sharing his garden's bounty with family, friends and neighbors -- even giving away his last homegrown cantaloupe in October.

Jim enjoyed his annual pack trips with the guys hunting mule deer in the Pasayten Wilderness and crabbing with his brother Boyd for many years. Jim could tell a story like nobody else and loved spending time with his friends and family. He was a people person and rarely met a person he didn't like. He will be so missed by all. His "Jim isms" will carry on!

Jim is survived by his wife Margie, son Tom Zimmerman (Judy), and daughters Annie Hernandez (Jerry), Nancy Alvord (Dave), Laura Powers (Cameron) and Alison Bailey and his sister Eloise Green. He is also survived by 11 grandchildren, 22 great grandchildren and several nieces and nephews. He was preceded in death by his parents, Ed & Stella Zimmerman, his brother Boyd Zimmerman and his grandson Aaron Hernandez.

A private family memorial will take place at a later date. Donations can be sent to your favorite charity. Arrangements are under the care of Kern Funeral Home.