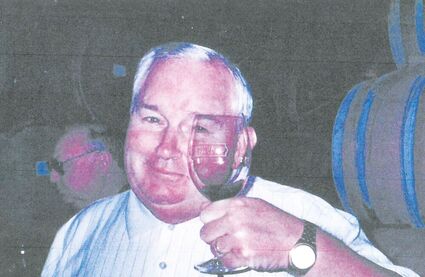 Bob was born February 29, 1944, in Detroit, MI to his parents, Marion Brenniman Rosso and William Rosso. The family moved west to Lake Oswego, OR in 1950, and Bob began the life he was proud of. He was a star football player at Lake Oswego HS, and then went on to work his way through the University of Oregon by working with the Bureau of Public Roads, who helped him get his BS in Business and Marketing. He then went to work for Georgia Pacific Corporation where he remained for 30 years, and was the youngest Branch Manager in the country in Boise, ID. He was then transferred to Woodinville, WA, where he turned that ailing branch around to be very profitable. He met his future wife, Judy Doherty, who also worked at GP, a corporate romance, who helped him with his particleboard sales, she was the buyer in the main office in Portland. They married in 1971 and were married for 51 years.

He was proud of his allegiance to the University of Oregon, and what it means to be a Duck. He always wore a Duck shirt, especially to his many appointments to his diabetic doctor at the University of Washington. He served on the Alumni Board for several terms and was a season ticket holder for all the football games. There were many wonderful football weekends and gatherings with friends, Barbara and Duane Cargill, at their home on the McKenzie River.

Bob had a full, wonderful life and didn't let his diabetes stop him. He always credited his doctor, D. Irl Hirsch, with saving and extending his life. He and Judy spent many summers boating in the San Juan and Gulf Islands in their Tolly Sundown.

After leaving GP in 1990, he started his own business, Evergreen West Wholesale Lumber with his wife and a business partner, Jim Wilharm. It grew from small beginnings to a million dollar business that lasted for 20 years.

In retirement they built a home in Shelter Bay in the Town of La Conner in Skagit County. They loved the area and made new friends and also traveled extensively to Italy, the Greek Islands, Scotland, Ireland, Fiji, and Australia.

Bob was the most generous of men and loved to socialize and give parties. He supported many charities. He was a Big man with a Big heart and will be missed in a Big way, leaving us with Big holes in our hearts.

In lieu of flowers, the family suggests donations to either Shriner's Hospital for Children, St. Jude's Hospital for Children, or the Alzheimer's Foundation, and would also like to express their undying thanks to the staff of Sunrise View Convalescent Center and to Hospice Continuum Care of Snohomish for their loving care of Bob during his last weeks. Words can't express how wonderful they were to him and the family.