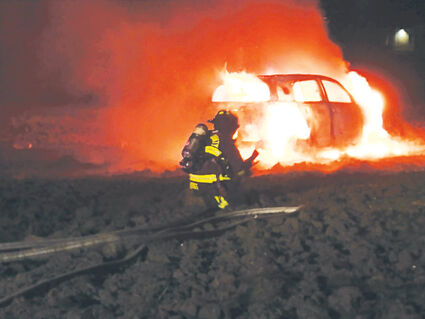 ANOTHER NIGHT OF VOLUNTEER WORK – Firefighters from the La Conner (in brown) and Fire District 13 (black) fire departments answered the call last Tuesday night. Working together, they put out the fully enflamed SUV in less than 10 minutes. No one associated with the vehicle was found.

Why an SUV was in a farm field just north of La Conner and who set it on fire last Tuesday night, Nov. 22 remains a mystery, but it is certain that it was totally engulfed in flames by the time Fire District 13 and La Conner fire department trucks arrived about 9:20 p.m. FD 13 responded first to the 911 call and toned out La Conner, requesting assistance. La Conner staff initially took command, FD 13 Chief Wood Weiss reported.

Two Swinomish Tribal Police cars were first on the scene after the fire was called in at 9:16 p.m. The officers provided traffic control on La Conner Whitney Road on...