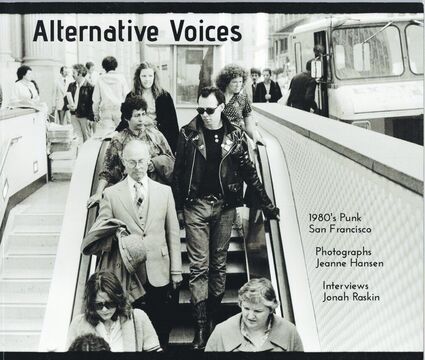 Looking at the photos and reading the stories in Jeanne Hansen's book, "Alternative Voices: 1980s Punk San Francisco," one thing is clear to me. We lived in different worlds during the 1980s. I was the editor of a windsurfing magazine and spent my time traveling to beaches around the world, interacting with sun-kissed athletes, while she immersed herself in documenting the punk rock alternative scene in San Francisco.

I did visit San Francisco in the '80s, but I spent my time down at the beach in the Presidio, watching windsurfing races. Windsurfing was its own subculture, a combination of surf and ski bums and traditional yacht racers who embraced a challenging new sport.

Hansen captures another subculture thriving in pockets of San Francisco: the punk rock scene. More than anything, this book translates to me as a love letter to the people she knew during that time. No one interviewed in the book was a native San Franciscan, yet all came to the city for the same experience – to find themselves, to rail against the machine and to experiment, especially with music.

A graduate of the San Francisco Institute of Art, Hansen takes photographs that are unapologetic and journalistic, shot in a style akin to what has since become known as "street" photography. Her contrasty black and white images were captured with an unblinking eye, revealing raw and unscripted moments.

There are no formal portraits, no traditional compositions – Hansen is expressing her creativity in response to the energy and creativity she is documenting. She captures the zeitgeist beautifully, from the sweaty performances in small cafes to morning-after party detritus, protesters and poets, politicians and punk rockers – it looks and reads, like an alternative college yearbook. The central figures in her book were musicians and cabbies, waiters and poets, dreamers just getting by, and they stand out against the backdrop of men in business suits headed to traditional jobs.

Hansen skillfully documented a San Francisco that is long gone and in so doing saved for posterity the punk energy and discontent of the Reagan era, capturing this unique time and place. It was just at the beginning of the HIV/AIDS crisis and when I showed this book to a gay friend he smiled as he looked at it then turned away, saying "It makes me sad because we lost so many people to AIDS."

That is the tension that holds this book together – the scenes of earnest, yet ultimately innocent youth who are protesting the miserable world capitalism is creating, embracing the freedom of self-expression and yet on the cusp of a horrific disease that would wipe out so many of their peers and forever change the city.

I can't help but think this s book's isn't just those of us who were young adults during the era, but also those young adults living there now who only know the city as a high-priced tech hub.

I remember eating in restaurants in what had been old houses and shopping in warehouses back then. No doubt everywhere I went has since been gentrified.

There was an underbelly to the city that was different and alluring to anyone who had never seen a city like that. I may have missed the punk scene, but I do have fond memories of the quirkiness and creativity that graced the city then.

The culmination of eight years of Hansen's careful re-examination and editing of her work and life during that time, plus the candid and entertaining interviews by Jonah Raskin, brings to life the San Francisco experienced and dreamed of by the people who flocked there for the punk rock alternative scene. The book was published to coincide with an exhibit of Hansen's prints at the Jewett Gallery of the San Francisco Public Library. Postponed by the pandemic, the book was self-published in 2021.

Looking through and reading this well-curated collection of images and stories gave me insights into a world that had gone completely unnoticed by me when I was pre-occupied with wind speed and wave height and who might set the next speed sailing record. Thanks to Hansen, I can see now what I missed.

It's a testament to the power of photography – and the creative eye of the photographer – to capture what others miss.

As a photographer, I understand the difficult task of curating one's own work and the labor of love required to pull together a book. I can only imagine how difficult it was for Hansen to narrow down the images as she no doubt relived the time and place she so expertly documented.