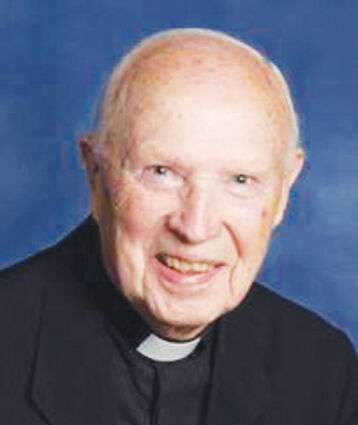 Father William Treacy died Sunday, Oct. 16 at the age of 103. He spent his final days at his home on the grounds of Camp Korey in Mount Vernon. A leader of ecumenical and interfaith relations in the Pacific Northwest, Father Treacy touched the hearts and minds of people of diverse faith traditions throughout the world. He came to Seattle in his early 20s and ended up creating a television series with Rabbi Raphael Levine of Temple De Hirsch Sinai in 1960 called "Challenge." The program aired for fourteen years on KOMO Television, exploring interfaith issues, particularly between Christianity and Judaism. Their friendship ultimately led to the purchase of a farm in Skagit County. Together they created a facility called Camp Brotherhood which promoted understanding between people of different faiths, cultural backgrounds and ethnicities.

Born in County Laois, Ireland on May 31, 1919, he was the first child of John and Mary Delaney Treacy. He was educated in elementary and high schools in Kilkenny and in 1937 entered St. Patrick's Seminary in Maynooth. There he was ordained a Catholic priest on June 18, 1944.

After six months of ministry in his home diocese of Ossory, Fr. Treacy answered the call of Bishop Shaughnessy to volunteer for service in the Archdiocese of Seattle. It was to be a temporary assignment of five years, but extended to span the remainder of his life. He traveled on the Ile de France troop ship to New York, made his way to Seattle in 1945 and was initially assigned to St. Alphonsus Parish in Ballard.

He served for sixteen years as a member of the Chancery staff for the Archdiocese of Seattle, while also serving as the chaplain of Holy Names Academy from 1952 to 1964. His first assignment as a pastor was at St. Patrick's Parish in Seattle, followed by assignments to St. Michael Parish in Olympia, Our Lady of the Lake Parish in Seattle and as the first resident pastor of St. Cecilia Parish in Stanwood.

On his retirement as pastor in 1989, Father Treacy remained active, assisting at numerous churches including Sacred Heart Parishes in Bellevue and La Conner, Immaculate Conception Parishes in Arlington and Mount Vernon, St. Paul Parish on the Swinomish Reservation and at St. Thomas More Parish in Lynnwood.

Father Treacy's ministry extended far beyond his parochial responsibilities. He served as the Archdiocesan Chaplain of the Legion of Mary from 1948 to 1978. While serving as the Chaplain to Council 676 of the Knights of Columbus, he directed the nationwide program for advertising Catholic teachings in city newspapers.

One of Fr. Treacy's great legacies was serving as a panelist on the KOMO TV program "Challenge" from 1960 to 1974. Fr. Treacy and Rabbi Raphael Levine of Temple De Hirsch Sinai teamed with rotating protestant ministers to offer this Sunday night interfaith program. Each week they would discuss important current events from an interfaith point of view. In 1960, their program, "Who Crucified Christ." received a national award from the National Conference of Christians and Jews.

Fr. Treacy and Rabbi Levine's television collaboration led to a close personal friendship, one which resulted in the purchase of a 300-acre Skagit Valley farm in 1966. The two men created an interfaith center they would call Camp Brotherhood. It ultimately hosted more than a quarter of a million people from different faith and wisdom traditions, including groups from Afghanistan, Pakistan, Israel, Palestine, India and other nations who sought to learn how to bring harmony to themselves, each other and the human family.

When physical ownership of the property was assumed by Camp Korey in 2016, that interfaith work continued in the programs of the group Paths to Understanding. Father Treacy continued to serve as an advisor to this nonprofit until his passing, a group that seeks to bridge bias and build unity through multi-faith peacemaking.

Fr. Treacy's mother and father, Mary and John, his sister Mary and brothers Sean and Joe preceded him in death. He is survived by his grandniece Lorena and nephew John and countless other relatives and friends.

Fr. Treacy challenges us with his personal motto: "What's the loving thing to do!"

Eternal rest grant unto him, O Lord and let Your perpetual light shine upon him. May his soul and all the souls of the faithful departed, rest in peace. Cards of remembrance can be sent to: