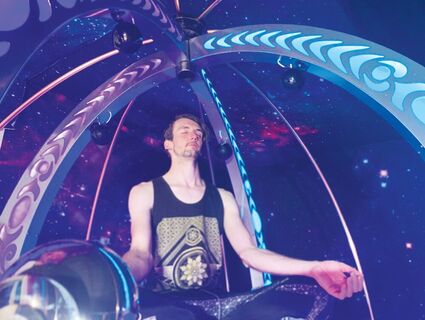 SOUND THERAPY – People seeking stress reduction and pain relief are turning to technology developed over the past 20 years by La Conner alum Louisa Firethorne. Her life's work is the sonosphere, an acoustic/cymatic sound massage platform with 360-degree spherical surround sound.

She was the definition of a quick study while a senior at La Conner High School, simultaneously earning an associate-in-arts degree from nearby Skagit Valley College before enrolling in fall 2000 at Western Washington University as an 18-year-old junior.

But over the past two decades Louisa Firethorne has also shown great patience and perseverance by nurturing her college senior project to fruition from its start as a mere sketch on a napkin.

Firethorne, a professional webpage designer, is first and foremost an inventor. And her trademark creation, a cymatic sonosphere designed to provide both relaxation and relief from pain, has been in the works since her WWU days.

The sonosphere that Firethorne has developed from her initial prototype is an instrument that uses geometry, musical harmonics and physics principles to provide a customized sound experience to aid the therapeutic healing process for ailments ranging from chronic pain to anxiety.

She makes sonosphere sessions available by appointment at her home office on Raleigh Lane off Indian Road west of La Conner.

Firethorne and her husband, Rowan, who is the sound engineer for the sonosphere, ultimately hope to produce more units and franchise their business.

She has received strong family support through the many steps taken on a journey she began in 2002 at the Fairhaven campus in Bellingham. Firethorne created her own degree program addressing human consciousness through art, science and music.

She cited encouragement from her mom and stepdad, Susan and Casey Schanen, founders of Nell Thorn Restaurant & Pub on the La Conner waterfront, and dad Bill McCuskey, an electrical engineer who helped pioneer the satellite dish industry.

Her inventiveness was likewise recognized while in high school.

"My science teacher at La Conner, Mr. Dalseg, inspired me," she recalled during an interview with the Weekly News. "He would always call me Dr. McCuskey."

At Western, her senior project evolved from that rough drawing into a prototype too large to transport to Bellingham.

"I had it covered with a tarp in the back yard," she said. "The professor had to come down here to grade it since I couldn't take it up there."

Her first sonosphere received a stamp of approval both from WWU faculty and the public. Among those sharing positive reviews when it went on display, said Firethorne, was La Conner author Tom Robbins.

"He wrote a really nice note in my guest book," she said.

Ultimately, the sonosphere went on Firethorne's backburner while she went about making a living. Then, literally out of the blue, came a phone call from a wealthy British entrepreneur offering to buy a sonosphere from Firethorne.

Firethorne set out to upgrade her sonosphere, hiring Seattle fabricator Rusty Oliver to fashion a new model for shipment to England a year later. Then Firethorne was summoned by her client to his English country estate where he wanted to start a sound-based healing business.

Though a satisfied customer, he dropped off Firethorne's radar, not to be heard from again.

Years later, as she built her webpage design career, Firethorne didn't lose sight of her sonosphere dream. She returned to school to study physics and material science.

"I did more research into the sonosphere from the physics perspective," she explained.

The result was development of a more powerful sonosphere, one in which the sound can penetrate more deeply.

"I've been collecting user feedback and making my prototypes of the sonosphere for the last 20 years," Firethorne noted in a recent social media post. "I pursued higher education in physics in order to design this cymatic version and bring it to the public. Cymatics is the study of sound and vibration made visible.

Firethorne said she has put every extra – and not extra – dollar into the project.

"Nothing like this exists anywhere else on earth," she said. "This is the world's first full sphere of sound with cymatic full body massage."