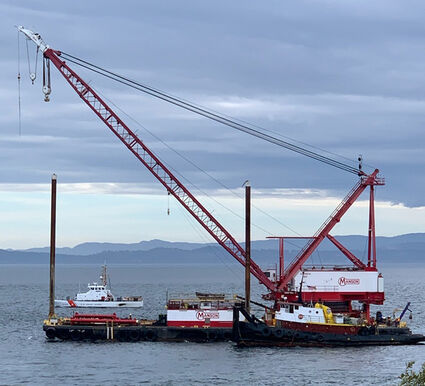 BOTH A LONG AND DEEP HAUL – Sunday, Aug. 28 salvage contractor Global Diving arrived at Sunset Point west of San Juan island. They anchored their barge and crane. It will be take some 10-days to raise the sunken vessel Aleutian Isle and secure it for transport.

The Aleutian Isle remains in about 200 feet of water on the west side of San Juan Island near Sunset Point. Monday, Aug. 29, salvaging it was about to begin, after a boat and crew from Global Diving & Salvage arrived Sunday, said Petty Officer Steve Strohmaier, a U.S. Coast Guard spokesperson. He confirmed the 49-foot fishing boat is owned by the Swinomish Indian Tribal Community.

The barge and crane were secured Sunday, preparing for the 10-day effort to raise the sunken vessel, place it on the barge and remove it to a safe spot to remove pollutants, Strohmaier said.