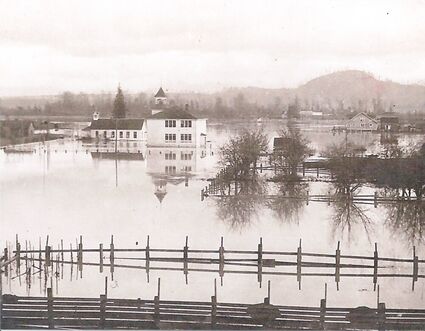 LIFE IN HARMONY - Life in the Harmony District was centered on the Harmony School, built in 1908, and the Swedish Baptist church, built in 1901, both on Calhoun road just east of Kamb. Above, is Harmony during the 1917 flood.

Books clubs and bridge groups come and go, but the Harmony Birthday Club has been around for about 130 years.

Honored with a Pioneer Spirit award at the Aug. 4 Pioneer Picnic, the club has been building connections and community since the 1890s.

While the Harmony district lies east of La Conner, a number of its residents support La Conner schools and the library with their property taxes.

You're in Harmony when you drive east on Calhoun Road from Best and Chilberg roads. While the heart of Harmony is the intersection of Calhoun and Kamb, the district runs from Beaver Marsh Road to the river, and all along Kamb, Jungquist and Penn roads.

Roozengaarde and the Washington Bulb Company are in Harmony. So is the VanderKooy family's Harmony Dairy. Harmony Coffee Service maintains and repairs espresso machines and coffee brewing equipment from Jungquist road. Harmony is also the name of this county voting precinct.

According to resident Jeanne Youngquist, Calhoun Road was one of the first east-west roads between La Conner and Mount Vernon and was graveled in 1910. Early settlers ferried across the Skagit from the eastern terminus of Calhoun, where another Harmony enterprise, the Thulen family Pioneer Potatoes shed, now stands.

In the 1890s, Harmony School and a Swedish Baptist Church stood near Calhoun and Kamb roads. Closer to the river was the Skagit County Home for the Aged and Indigent – e.g., the Poor Farm – founded in 1907. Later the Home sheltered injured veterans of World War I, and in the 1930s became the Skagit County Home and Tuberculosis Sanitarium. Its last incarnation before being demolished was as a nursing home.

Organized to support these institutions, what was then called the Harmony Improvement Club also sponsored Christmas programs at the church and school, often featuring the Harmony Brass Band. The band and the buildings are long gone, but the Harmony Birthday Club is still bringing members together for social events and supporting Fire District 2 on McLean Road along with the Skagit Valley Herald Christmas Fund.

For many years members gathered at one another's homes to listen to a guest speaker and celebrate that month's birthdays.

"The programs were all kind of educational, and I ended up talking about elections at one of them," said Youngquist, Skagit County's auditor from 2007-2018.

There were Christmas potlucks at the McLean Road fire hall, where the key was under the rock and using the hall was free. "I wonder if that rock is still there," she mused.

Between events, members could borrow the Birthday Club dessert dishes for their own family functions.

The Birthday Club's Memory Book is chock full of party photos and clippings that document member milestones like graduations, Eagle Scout ceremonies, weddings, anniversaries and deaths. All these life events were also documented in Birthday Club newsletters, which continue to give updates on members who have moved out of the area or into assisted living.

"This is one of the best-documented social clubs in the county," said Mari Densmore, archivist for the Skagit Valley Historical Museum.

Over the last decade activities have tapered off, but the annual backyard summer family picnic continued until COVID-19 arrived. Members are hoping it can be revived soon.

Daralene Youngquist, 98, and Lola Ellestad, 97, are the oldest Birthday Club members. They joined the club in 1947 when they moved into Harmony.

Ellestad says the club was "basically the PTA" when she and her family arrived. That Harmony School closed just as her daughter was starting first grade was a big disappointment, but she was happy to be part of a group that chose "secret sisters" and bought them little gifts or flowers when their birthdays were celebrated. To fine-tune their choices, secret sisters could consult a master list of the colors and styles of the members' kitchens and living rooms.

"It was just fun, something you wanted to be part of," she said. "I think one reason why this is such a nice neighborhood is because we all saw to it that the new ones were welcomed."

"Whether members were born, married into, or moved into the district," said Youngquist, "the Club has brought neighbors together with historic memories and friendships for well over a century."

Which certainly deserves a prize!