Swinomish National Night Out brings public and police together 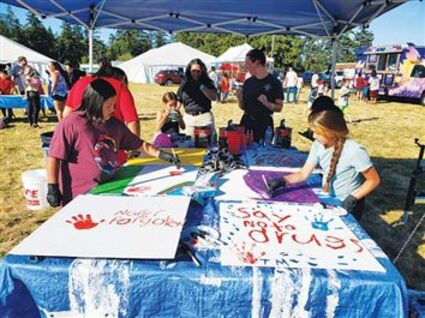 Sirens blared and lights flashed at John K. Bob Ball Park Tuesday, Aug. 2, the sure signs of a big bust.

However, no crime occurred. Instead, this was a planned event at the Swinomish outdoor recreation area, the Swinomish Tribal Police Department’s National Night Out celebration. Participant came to a giant and festive block party complete with loud upbeat rock-n-roll music, activity booths for folks of all ages, rides on emergency vehicles, a celebrity dunk tank and free food.

Billed as an annual community-building project, National Night Out is designed to foster relationships between neighbors and law enforcement in a campaign to bring back a true sense of community annually on the first Tuesday in August in communities nationwide.

At Swinomish, it was perhaps best defined when DJ Heidi J. Darling played the 1979 Sister Sledge hit “We Are Family.”

Children, parents and grandparents took part in the fun. So, too, did those who worked at the event.

“You ought to be directing traffic like that out in the street,” a man impressed with Flores’ footwork, said in passing.

Swinomish Police Chief Earl Cowan, Lt. Velma Lockrem and District #13 Fire Chief Wood Weiss had little room to maneuver. They found themselves seated precariously atop the dunk tank. For each, the night was a splash.

“You’re too accurate,” Weiss told one youth who knocked him in the water with a perfect toss at the booth’s target lever.

Cowan received more than his share of soakings. The first came when Lona Wilbur of Swinomish rushed forward to push the lever.

Another popular stop was a booth where people in line took turns wearing “Fatal Vision” goggles that simulated impairment caused by marijuana and various levels of alcohol.

“There were a lot of people involved in putting this together,” said Swinomish Police patrol officer Char Burks.

National Night Out began in August 1984 involving over two million neighbors across 400 communities in 23 states. It grew from there. Some areas in the southern U.S. schedule their National Night Out gatherings in October due to intense early August summer heat.