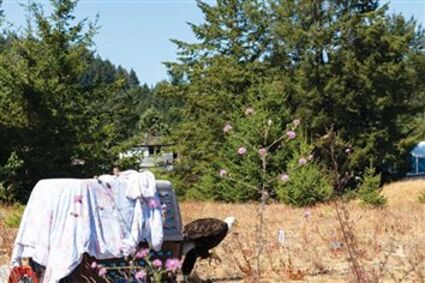 EAGLE FOUND HIS WINGS- A lead-poisoned female bald eagle was found in a rock jetty between McGlinn and Goat islands. After 42 days in rehabilitations with PAWS, the eagle was released near McGlinn Island July 28. Rescuer Ted Edge, Jr, photo page 9. -Photo by Marissa Conklin

A five-year-old female bald eagle held in captivity for six weeks while being successfully treated for lead toxicity was released back into the wild near McGlinn Island south of La Conner July 28.

The staff at PAWS (Progressive Animal Welfare Society) in Snohomish County got the lead out of the eagle – it was weakened to the point of having difficulty standing and not being able to fly – with a medical regimen specifically designed to address heavy metal poisoning.