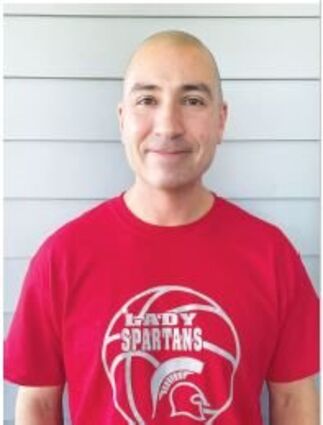 Swanson, from a pioneer La Conner family, was an integral part of basketball teams here for 15 years, serving on the high school boys’ and girls’ staffs and coaching youths from Little Dribblers through eighth grade.

He hopes to replicate the success he had working alongside head coach Scott Novak.

Swanson was courtside with Braves and Lady Braves teams that returned from Spokane with multiple state 2B trophies, including a second-place finish in 2020, a lineup that included his daughter, Juna Swanson, a Pacific University signee.

“My goals for Stanwood are for the kids who play in our program to feel and know how special it is to be a part of Stanwood girls’ basketball,” Swanson told the Weekly News. “We’ll have a great team culture, lots of fun, fast basketball and a great experience for the players, families and community when they watch us play.”

Swanson will be joined at 3A Stanwood by his younger daughter, Teagan, a rising freshman who played on the La Conner team that placed fourth at the 2B Girls’ Hardwood Classic in Spokane last March.

Swanson has hit the ground running, having already taken Stanwood players to a summer team camp.

“We had an incredible time,” said Swanson, whose coaching career began literally by chance.

“I was first asked to help coach basketball by my neighbor years ago in Arlington,” Swanson recalled. “I saw his son shooting on a hoop with no net. I happened to have one, so I offered it. I gave a few tips for his workout and when he told his dad what I did, I had a knock on my door to ask if I wanted to help coach a boys’ fifth and sixth grade team. I was hooked right away.”

“My role for the La Conner staff was helping Novak with anything he needed me to do,” Swanson said. “That included player development, communication, scouting, practice planning and just about everything you could think of.”

“But all the coaches we’ve had,” he pointed out, “have taught me things.”

He singled out another assistant, Lynette Cram, a physical therapist, former college athlete and local school board member, for sharing her insight.

Swanson leaves La Conner with many fond memories, perhaps first and foremost the opportunity to bond with players and coaches over the course of more than a decade.

“Justine Benson setting the scoring record at home on senior night versus Darrington; regionals versus Liberty (Spangle), that was when everyone started to believe anything was possible; beating Wahkiakum in the semifinals at state, finally getting to the championship game; and playing in the championship game, that was amazing, even though we lost.

“This last year, Juna’s senior season, beating Nooksack, Stanwood, Burlington-Edison, Mount Vernon Christian, Skyline and almost taking down Eastlake in their gym,” Swanson continued. “State wasn’t what we hoped for, but I was so happy to be with all the kids and coaches who mean so much to me.”

“I couldn’t be more excited to be a part of the Stanwood community,” he said. “There are so many dedicated basketball families who have made me feel welcomed. It’s a great fit.”