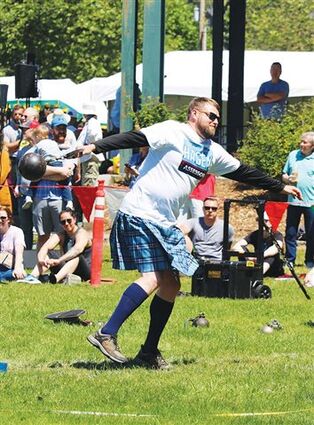 IT'S A TOSS-UP - Danny Hagen of Shelter Bay, a candidate for Skagit County assessor, participated in the weight for distance event, above, and other contests at the Skagit Valley Highland Games in Mount Vernon July 9. Hagen won several medals in the traditional Scottish sports contest. – Photo by Karla Reynolds

Danny Hagen’s race for Skagit County Assessor is not his only pursuit these days.

Sport truly trumped politics last weekend for Hagen, an independent who will face Republican Karie Storle in the November general election. As evidence, Hagen donned a kilt and tee-shirt rather than a candidate’s business suit.

Hagen has made the local Highland Games competition an annual ritual since 2009, except for 2020 and 2021 when it was canceled due to the COVID-1...