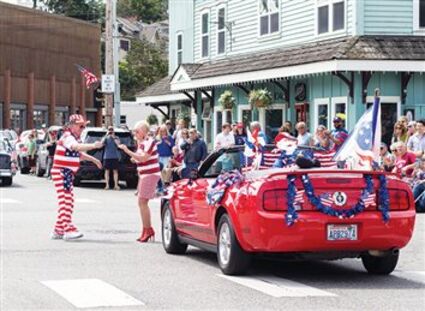 DANCING IN THE STREET – Jerry and Jeri Kaufman stepped out of their red Ford Mustang in the middle of the First Street intersection to dance a jig before continuing the parade. The song "Dancing in the Street" by Martha & The Vandellas played through their car stereo. Their dance routine continued until they finished the parade route. – Photo by Marissa Conklin

The crowd lining First Street for La Conner’s Fourth of July parade on Monday either stood for the 30-minute event or were seated on benches, in camp chairs, and along curbs.

But the best seats were reserved for Gable Wilkins and his gold medalist Special Olympics teammates. They rode on La Conner Hook & Ladder’s vintage ’41 Ford fire engine, leading the parade.

Fire Chief and Code Enforcement Officer Aaron Reinstra coordinated what was truly a special appearance by the team members, one much appreciated by all parade-goers.

Wilkins and the Special Olympians, who set the gold stand...