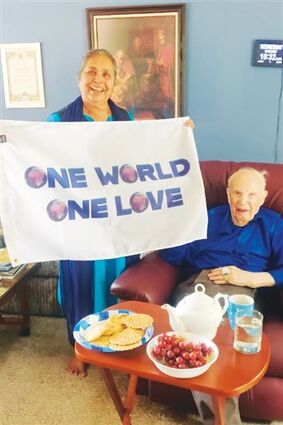 TWO OLD AND DEAR SOULS – Sister Lucy Kurian, director of the Maher Charitable Foundation in India, visited with Father William Treacy on his birthday, May 31. – Photo courtesy of Terry Leers

I have had the extraordinary privilege of developing a very close relationship with the amazing Father William Treacy, who celebrated his 103rd birthday in May.

We met through a non-profit and realized that we had very similar values although he is an Irish Catholic priest who grew up in Ireland and I am a New York Jew and the son of holocaust survivors.

Father was assigned to a parish in Seattle, where he met the equally progressive Rabbi Raphael Levine and they created the TV series “Challenge,” which explored interfaith issues. As a Jew married to a Catholic, I loved their ability...