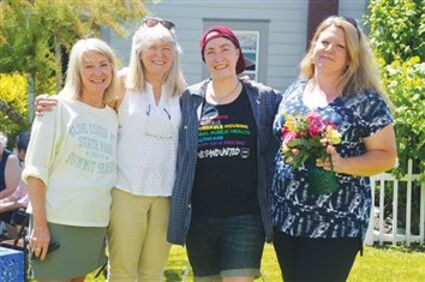 FOUR OF A KIND – The La Conner Sunrise Food Bank has been dealt a great hand by having as its directors, from left, Michelle Havist, Susan Widdop, Nicole Barclay-Mosaner and Arin Magill. Saturday they celebrated Magill’s return and were both happy and sad that Barclay-Mosaner is returning to her native New Zealand. – Photo by Ken Stern

The late singer-songwriter Harry Chapin, who gave away half his concert proceeds to fight hunger, once penned a song entitled “Circle.”

Magill, who helped launch the La Conner Sunrise Food Bank more than a decade ago, is returning to the pantry on Friday, July 1 as its director.

“I’m coming back full circle,” Magill told the Weekly News June 25 during an outdoor farewell reception for her predecessor, Nicole Barclay-Mosaner. She is going home to her native New Zealand after guiding the food bank over the past year.