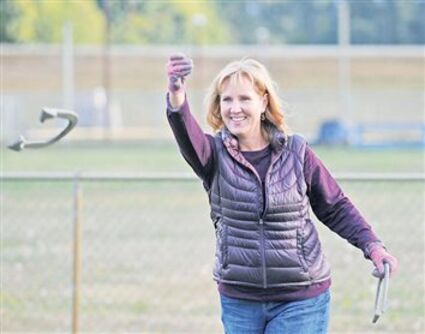 ALL STAR PITCHER – La Conner alum Cindy Clausen takes aim and sets her sights on a ringer. She says pitching horseshoes has allowed her to travel and make great friends. She loves the sport so much that she rarely misses an opportunity to pitch its benefits to others. – Photo courtesy of Cindy Clausen

Cindy Masters Clausen is the reigning Washington state women’s horseshoe pitching champion, a crown she has held since 2017. She is also a two-time state doubles title winner and has captured top honors at numerous other tournaments.

Clausen most recently was part of a four-member Washington pitching team that placed sixth out of 24 entries at the Team World competition in Beloit, WI.

“It was our first appearance at Team World and a great honor to participate,” Clausen said.

She traces her success to having played softball at...