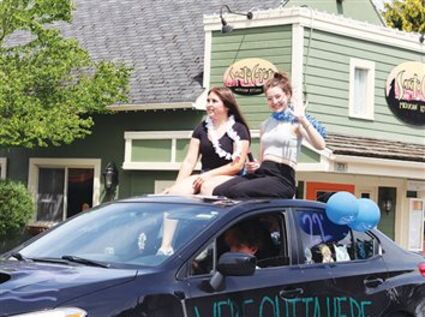 MOVING ON TO THE FUTURE – La Conner’s graduating seniors have a new tradition: a car parade. Last Thursday Hannah Grossglass, left, and Hannah Cook were in the motocade from the school campus through downtown. Later that afternoon the Swinomish graduates got a second parade on their reservation. See photo page 4. – Photo by Marissa Conklin

La Conner High School has held annual commencements for more than a century but the 5 p.m. June 10 graduation at Whittaker Field will offer something new.

Those attending will be officially welcomed in four languages, Lushootseed, English, Spanish and American Sign Language.

In another all-time first, the Class of 2022 boasts co-valedictorians and co-salutatorians.