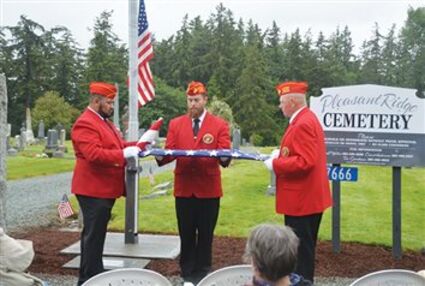 HONORING VETERANS AND REMEMBERING PIONEERS – Members of the Marine Corp League, #1043 performed flag raising and flag folding duties at the annual Memorial Day service at the Pleasant Ridge Cemetery Monday. This was the first time in three years that no one wore face masks. – Photo by Ken Stern

The weather was iffy, but the timing couldn’t have been better when Memorial Day ceremonies at the Swinomish Tribal Community Cemetery concluded Monday morning.

The symbolism was not lost on Brian Cladoosby, serving as master of ceremonies. He noted how Memorial Day, like the images that filled the sky, is meant to be firmly etched in the mind’s eye.

“We never get tired of coming up here and doing this,” Cladoosby said at the close of the program. “It’s something our elders taught us, and we need to pass it on to our youth.”

The ceremonies honored the memories of deceased Swinomish veterans and featured a formal blessing of graves. The tribe’s surviving veterans and those on active duty with the military were also recognized.

The lists read aloud were long. And inclusive.

“Even those who marry into our community,” Cladoosby said, “we recognize them as our family.”

As has become customary at Swinomish on Memorial Day, master carver Kevin Paul, whose older brother, Ken, is a U.S. Marine Corps veteran, performed “Soldier Boy,” the composition made famous by the Black Lodge Singers.

“The ultimate sacrifice,” he stressed, “has a ripple effect in our community.

And will do so well into the future, Cladoosby vowed.

“It’s up to us to teach our children,” he said, “because we want to be here forever. Our elders taught us we must always keep coming here.”

At Pleasant Ridge Cemetery, Rev. Don Robinson paid tribute to deceased veterans, pioneers, and Native Americans – the latter of which he noted shared their bounty with new immigrants – as well as all those interred at the local cemetery four miles east of La Conner.

“We share our gratitude and thanks to all of them for the risks they took and sacrifices they made,” Robinson noted, and “is a day for each of us to remember those who have gone before us and what we’ve benefitted from them.”

Robinson said each of us is the recipient of someone else’s life, love, and service.

“We remember the love they gave to us,” he said. “No one has shown greater love than the love to lay down one’s life for our friends and loved ones.”

Prior to and immediately after the Pleasant Ridge service, many of those attending took time to visit gravesites, those of veterans bearing U.S. flags placed by La Conner High School students earlier that morning.

One of those students, Sammy Williams, performed a stirring rendition of taps to end the ceremonies.

The program began with members of the U.S. Marine Corps League performing flag raising and flag folding duties, the opening of the ceremonies focused on those who served in the military.

“Our (cemetery district) commissioners decided to create a service,” said Robinson, “that honors not only those who died (in combat) but those survived and are buried here.”

Both services are steeped in history and tradition.

“Memorial Day is a day for remembering,” Robinson said at Pleasant Ridge. “This gathering is a call to peace.”

“These grounds,” Cladoosby said of the Swinomish cemetery, “are sacred and a place to honor those who’ve fallen.”

The Pleasant Ridge program did have a lighter moment courtesy of cemetery secretary Lori Buher. Buher, the La Conner Middle and High School counselor, recounted her father was a U.S. Navy veteran of World War II.

* Buher announced that Curt Miller, of Fir Island, has joined the three-member cemetery district board of commissioners, with. Rick Anderson and Tim Goodman.