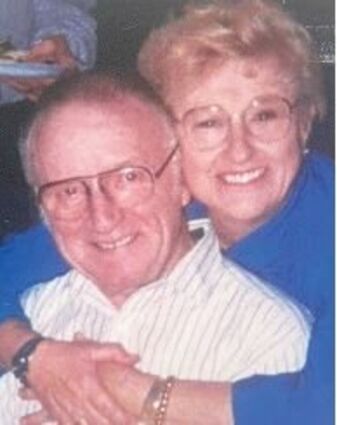 Born at home in Camas, Washington, she grew up on a farm next to Lacamas Lake, was an avid swimmer and became a lifeguard at 15, receiving local praise for saving a drowning boy. She was also passionate about music from a young age. She took voice lessons as a young girl and later studied classical voice at Lewis and Clark College. Though her musical training was interrupted by marriage and motherhood, singing and music remained lifelong passions for Marian.

Later, as a single parent Marian moved to Yakima, Washington where she worked in radio for a number of years. One night while out dancing with friends she missed the twirl/pass and fell onto a table wherein a woman unknown to her said, “I have someone I’d like you to meet.” That man was Joseph Roper, the love of her life for the rest of her years. Together they raised their five children.

As she and Joe built their life together, she became director of community relations for Yakima Valley Memorial Hospital, while she continued her community service work through professional and charitable organizations, among them Zonta, the American Cancer Society and, of particular pride as an avid outdoor enthusiast, a founding member of the Yakima Greenway.

Marian and Joe retired to La Conner, built their home and spent many enjoyable years boating, becoming founding members of Shelter Bay Yacht Club, traveling around the U.S. and she to many other countries. She also continued her participation in community betterment as a docent at the Museum of Northwest Art, active member of the Garden Club of La Conner, a supporter of Skagit Symphony Orchestra and Seattle Symphony Orchestra.