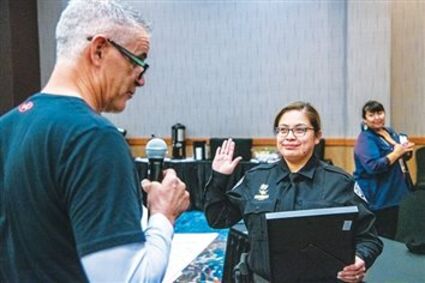 A 10-year veteran of the Swinomish Police Department, Velma Lockrem was inspired to pursue a career in law enforcement by her grandfather, Joe Bailey, a former officer who now serves as chief of Fish & Wildlife Enforcement for the tribe.

Lockrem was promoted to lieutenant and second-in-command status within the department during special ceremonies at Swinomish last week.

A Swinomish Indian Tribal Community member, Lockrem has risen through the ranks based upon her broad range of experience and extensive background, including service as the department’s training officer and police boat s...