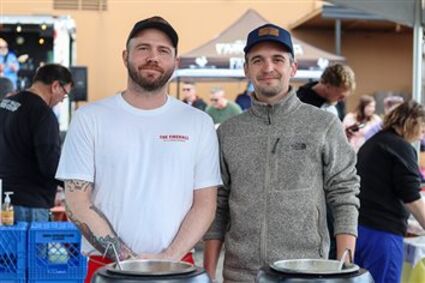 One could say chili and chowder are the two most popular soups year-round. But who is making the best in Skagit Valley this month?

This important question was answered at the Mount Vernon Chamber of Commerce’s chili and chowder cook-off April 2 at Farmstrong Brewing Co. Thirteen contestants handed out samples of chili and chowder in small plastic cups at the Saturday afternoon Skagit Valley Tulip Festival kick-off event in Farmstrong’s beer garden. Tickets were $15; the price did not stand in the way of hundreds of participants wanting to get a taste.

The contest had three divisions: professional, amateur and “Best in Show.” Each division had a separate winner for chili and chowder. After a two-year hiatus, the Mount Vernon Chamber of Commerce was excited to host again, Farmstrong Brewing Co wrote on their Facebook page.

La Conner Firehall Kitchen and Taphouse competed ahead of opening this summer on Morris and Fourth streets next to Pioneer Market. Chefs Chris Braden and Rayna Huitt entries were pork chili and clam chowder.

“Although we got nice comments about our chili from the guests there, it was the chowder that stole the show,” Huitt said. “The demand for it was high and about an hour before the event ended, we ran out of chowder.”

Even though their big pot of chowder was empty and their tasting was cut short, the Firehall Kitchen and Taphouse won first place in the professional division.

“Chris’ favorite part of the event was getting to meet other chefs and discuss the Firehall Kitchen and Taphouse,” Huitt said. “People were so excited to hear about the new restaurant opening and shared that they looked forward to grabbing a pint and a bite once the place is open for business.”

This was not Huitt and Braden’s first time participating in this cook-off. In 2018, they entered under the Skagit River Brewery and won first place in the professional division for both chili and chowder. This year was no different for Braden when he took the stage to accept his award for best chowder.

“My favorite part of this awesome event was the level of community engagement,” Huitt said. “It was so nice getting to chat with both new and familiar faces, gush about our favorite recipes at the event and discuss the dynamic menu and atmosphere of the Firehall.”

The Skagit Valley Food Co-op’s chili won the professional division. Lisa Gilden, prepared food director, called its entry the “friendliest,” that eaters appreciated the high quality beef, ground at the co-op. “It was not that spicy but was super flavorful,” she said, thick and hearty, with great texture. She called it clean and natural, though not all organic ingredients. She credited her kitchen crew for the recipe’s success.