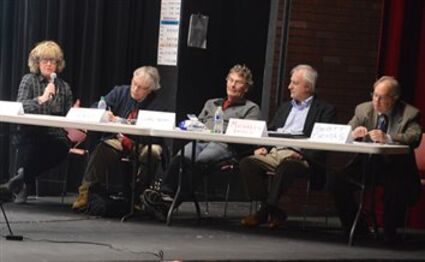 Some 30 town and area residents gathered last Thursday evening, March 31, in the La Conner school district auditorium seeking answers to “How does our town grow? and to ask their own questions at a workshop sponsored by the Town of La Conner’s communication committee.

Growth is directed into cities and urban growth areas, where transportation, sewer, water and utilities infrastructure is concentrated.

Town Administrator Scott Thomas had a question following his assertion: “We are going to grow. (The question is) how much and where is it going to?” For La Conner, that could be 1,200 residents in 2036, a 23.7% increase from the 970 population estimated by town planner Michael Davolio.

“We expect more people than we have places to put them,” Thomas said. In 2017 there were 544 residences, places to live. That increased to 560 in 2021. He predicts density, the number of people living in a home, as the population increases faster than the built environment does. Home prices will continue to rise because of the limited housing supply.

Davolio forecasts La Conner will top 1,000 people in the next couple of years and named the challenge as “providing sufficient property for housing development. He brought up the Town’s sale of the Hedlin’s Maple Avenue property and the March 31 public hearing on the proposed 20 unit condominium building on Center and Fourth streets as contentious projects. He recommended the latter get approved for a conditional use permit “not because it was a great project but because it was consistent with the (Town’s municipal) code.”

La Conner resident Gary Nelson, owner of Nelson Lumber Construction and on the board of directors of Skagit Habitat for Humanity asserted there is enough housing in La Conner, pointing out, on average, not even two people live in each of the 560 homes. The town lacks affordable housing. It has been 25 years since South Park, now Channel Cove, added some 25 income-limited housing units in the community, Nelson pointed out.

He offered a vision and a challenge: “As a community we have to decide what we want our town to look like. We are ok for density but we need to plan for it. That needs to be done with a long range plan in place.” The affordable housing goal in the town’s comprehensive plan under the Growth Management Act has not been met the last 20 years, he said.

The first curated question presented by moderator Wende Sanderson, president of Skagit League of Women Voters, asked “What is affordable housing?” Nelson responded that the federal criteria is 30% of household income be budgeted for housing and spending more places people in a “danger zone.” The guidelines maximum costs is $300,000, he said. At Habitat they need subsidies to build an 1,100 square foot house.

Davolio responded that rental housing is in short supply locally.

Davolio said the town does not have plans to restrict short term rentals in response to that question.

Asked about the Town selling the Hedlin property after purchasing it, Thomas said funds had not been budgeted for its purchase and the Town could not afford it, “that the only option was to go to developing (it).” Davolio had pointed out earlier that 24,000 square feet were reserved for a park.

The evening started with index cards passed out and attendees instructed to offer questions on one side and to list what they value and love about living in La Conner. Hanneman closed the presentation with the response “It is the closest thing I have to living at an ancestral home with a small town convention.”

The communications committee, led by town Councilmembers MaryLee Chamberlain and Rick Dole, moved quickly to organize the workshop five weeks after their first meeting. Committee members include Heather Carter, Maureen Harlan, Ken Stern, Hanneman and Thomas. They intend a series of community conversations on issues of interest to the community. They are encouraging residents “participation in shaping how we understand and navigate the future together.”

The first panelists were Laura Hodgson and Lexine Long, senior planners with the state Department of Commerce, participating by video.