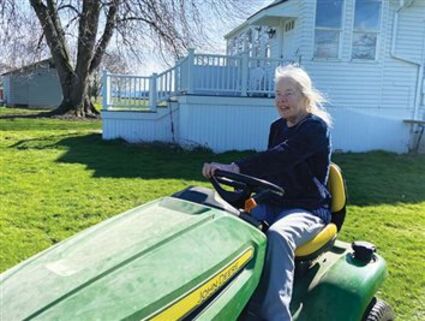 ENSURING THAT THE BACK AND FRONT FORTY ARE FOREVER MOWED – Nancy Dunton loved mowing her family’s lawn as a girl and loves it still. The La Conner woman has preserved 170 of her family’s 238 acres through the Skagit Farmland Legacy program. – Photo courtesy of Tahlia Honea

When Jens Peder Nielsen came to La Conner from Iowa with the Hulburt family early in the 20th century, land was on his mind.

Soon J. P. Nelson, as he began calling himself, was using earnings from his job with the Hulburts to buy small parcels as they became available.

“Nobody is going to build on this land EVER,” said Dunton, a La Conner native who graduated from high...