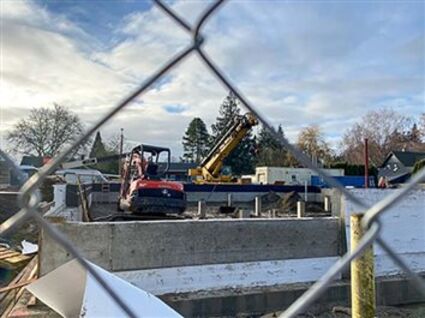 The governor and legislators understand the setbacks in construction projects from the coronavirus pandemic and associated schedule delays and cost increases in labor and materials, Hayes said. Library board co-chair Jim Airy pointed out that the time to receive all of the required permits increased from eight weeks to eight months. During this time, the cost of wood tripled and other construction costs increased significantly as well. As a result, every bid received was substantially higher than the construction budget.

Gilday, a member of the House Capital Budget Committee, has sponsored the House version of the funding request, part of the supplemental budget negotiations, staff member Kelley Payne wrote in an email. Supplemental budgets make minor adjustments to 2021’s two-year budget. Muzzall is sponsoring the funding in the Senate’s bill.

Hayes’ assessment: “We are really in a fortunate position. We have had two rounds of funding already. It is being built and it is not the first project that has come to the legislature because of COVID. Had it not been for delays and increases due to the pandemic, the library would have been completed and operating last fall.”

He said Timmons told the group that state COVID-19 emergency funds could also be explored.

Hayes said his message for Inslee was “this has been an extraordinary, unprecedented two years.” That prompted Hayes to use the Association of Washington Cities lobby day to pursue the Town of La Conner’s request for the La Conner Swinomish Library project. He had noted the governor’s support last year for the Mount Vernon Commons project, with its library, community center and parking garage

Payne noted requests total more than the (supplemental) funds available, writing “the biggest hurdle this year is the number of capital budget requests.”