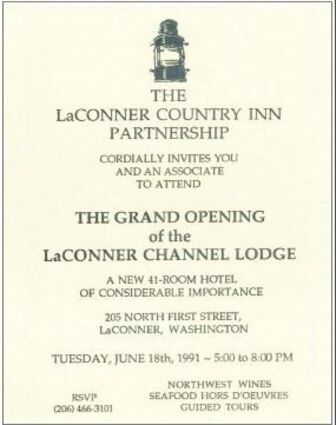 DID YOU ATTEND? - The Channel Lodge was the place to be to celebrate La Conner’s expanding tourist trade on June 18, 1991. It is still the place to be, almost 31 years later – Image courtesy of Rick Thompson

It’s an equation that added up quite nicely for Rick Thompson and his Country Inn partners.

After some changes within the original partnership, bringing aboard Jim MacLean and Tom Whyte, the inn group repeated its successful formula by unveiling plans to build a second hotel on the North First Street waterfront.

“There were two failed proposals before us,” said Thompson. “But we realized that a hotel was probably going to be built there sometime.”