By Bill Reynolds and Ken Stern 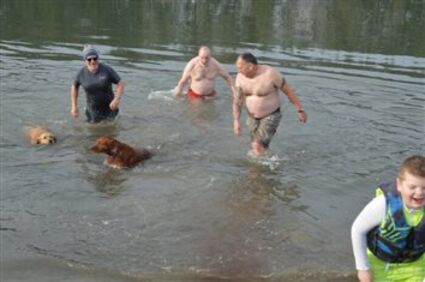 THE BEST WAY TO BRACE FOR A NEW YEAR – Randy Hayes, John Leaver, Rick Dole and Porter Weatherford, from left, plunged in Saturday morning. Weatherford followed the principle last in, first out. About a dozen neighbors, friends and families member cheered them on from the Swinomish Channel beach just north of Pearle Jensen Way. Chrissy, left, and Mel stuck close to Hayes. – Photo by Ken Stern

New Year’s came in with a bang for most people here, with loud fireworks on the west side of the Swinomish Channel signaling the arrival of 2022.

For a few hardy others, though, the calendar turned over with a splash.

Those brave souls, including seven-year-old Porter Weatherford, literally dove into the new year by taking a dip into frigid Swinomish Channel north of La Conner Marina.

Waiting 30 minutes did not make it any warmer.

Former Town Councilmember John Leaver and co-organizer Rick Dole were ready to go in at 11 a.m. but they then recalled they had promoted an 11:30 a.m. start...