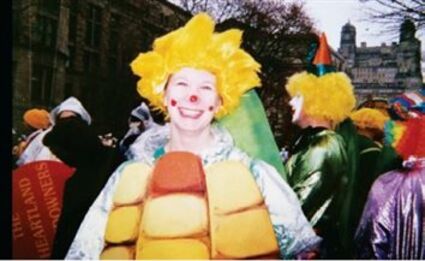 WHO HAS A GOOD EAR OF CORN JOKE?- Annie Taylor was obviously happy to join in and walk the Macy's Thanksgiving Parade route as an ear of corn back in 1999. That is her story and she is sticking to it. -Photo courtesy of Annie Taylor

I enjoyed reading Bill Reynolds’ Dec 22 article about Tristen Nelson’s participation in the Macy’s Thanksgiving Day Parade in New York City. But when I got to Russell Jensen’s quote (“I don’t know of anyone in town who has even been to the parade, let alone be part of it”), I had to respond.

While living in Manhattan working for Levi Strauss & Co., I saw a notice on a bulletin board in the back hall of Macy’s Herald Square asking for volunteers for the big parade. Where do I sign up?

I proudly walked as an ear of corn in the 1999 Macy’s Parade alongside The Tom Turkey fl...