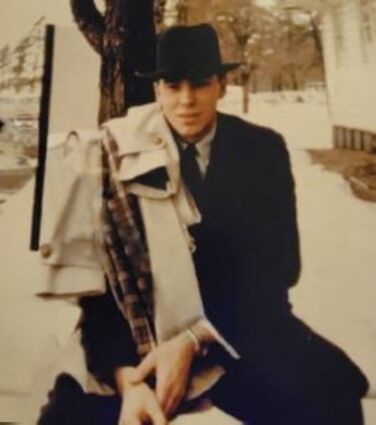 Harry Alberts, the husband of Cheryl Telford, passed away on November 17th at home in Shelter Bay, La Conner, WA.

He would say that one of his best decisions in life was marrying his wife, Cheryl, as they both had a shared artistic passion, he as a ceramist and she as a painter. He pursued his craft for most of his life experiencing the pure joy of learning and mastering this art form. He was intrigued by the interrelationship of materials, the ongoing labor-intensive process, and the discipline of firing. This artistic streak trickled into other areas of his life too and included photography and baking, to which he brought his artistic eye and skilled hands

While at the University of Wisconsin in the 1950s, fencing was his passion, and his team won the NCAA National championship in 1955.

During the Cold War he served in the Army, and spent a tour in Bavaria, Germany.

Those were glorious days for him enjoying driving around Europe in his Porsche making certain to not risk getting too close to the East German border due to the scope of his military assignment.

While there he renewed his interest in fencing by joining a local German fencing club that challenged him by playing alongside Germany’s Olympic team.

After his service years, he followed his interest in journalism and landed a job at the LA Times in the basement “morgue” where he happily filed archival material all day.

His next job was working 30 years for United Airlines at Dulles Airport where he used the opportunity to travel the world.

Those who knew Harry loved his laugh, and dry humor.

He had an amazing recall of movies, actors, songs, and lyrics.

Harry enjoyed the company of others in select settings, yet was the most comfortable in periods of solitude.