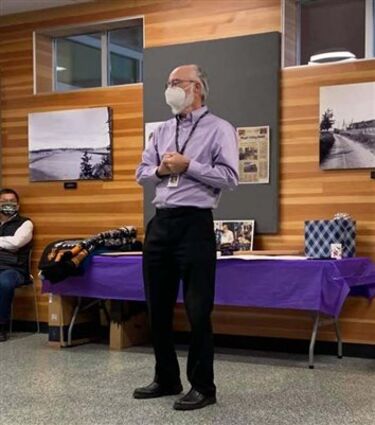 TIME TO STEP DOWN AFTER A LONG CAREER STANDING UP – John Stephans has retired from his last role, CEO of the tribe’s didgwálic Wellness Center with the Swinomish Indian Tribal Community His career spanned 40 years. – Photo courtesy of Leon John

Few people enjoy as strong a command of language as John Stephens: In four decades of public speaking gigs representing the Swinomish Indian Tribal Community, Town of La Conner, La Conner schools and Skagit Valley College he has been aptly described as a walking thesaurus.

Or, putting it in more modern terms, Stephens was Google before there was Google.

But more recently, in the week since his retirement from Swinomish, where he filled several administrative roles, Stephens is the one who has been deluged with words.

Words of praise, that is.

“He will be remembered as one of the great...