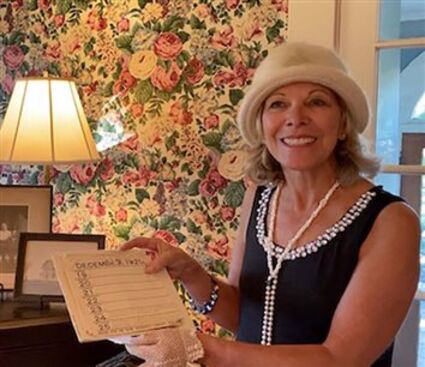 CELEBRATING A HISTORY THAT GOES BACK TO THE REVOLUTION – That is Sue Deyo portraying her great grandmother Adda Gaches in a video celebrating the 100th anniversary of the Skagit chapter of the Daughters of the American Revolution. Deyo lives in the same house as great grandmother. She shared her family’s and the chapter’s history in the September video – Photo courtesy of Kim Kimmy

Susie Gardner Deyo, who chairs the La Conner School Board, revisited vivid chapters of her family legacy through a 10-minute video as part of the recent centennial celebration in Anacortes of the Ann Washington chapter of Daughters of the American Revolution.

The DAR is a lineage-based membership organization for women who are directly descended from a person involved in the United States’ efforts toward independence.

For the video, Deyo delved into character as her late g...