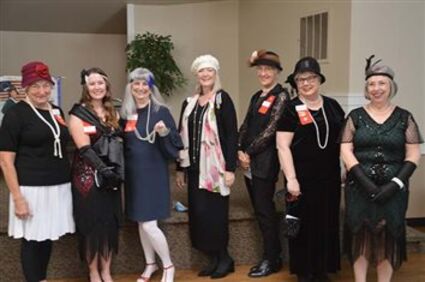 THE ROARING 20s RETURN FOR A SECOND CENTURY – Skagit County’s only Daughters of the American Revolution chapter, the Ann Washington Chapter, named for the great grandmother of President George Washington, is celebrating its 100th anniversary this year. Addis Gaches was the founding regent. Her spirit lives on in great granddaughter Susie Deyo and chapter members, above, channeling their ancestors. – Photo by Ken Stern

The Ann Washington Chapter of the Daughters of the American Revolution had a surprise keynote speaker highlighting their 100th anniversary celebration Saturday: Adda Gaches, founding Chapter Regent. Of course, it was a reenactment, since there were no video, much less internet, connections in 1921 when the only chapter in Skagit County formed in Mount Vernon.

The January installation was at “the home of Mrs. Roger Hannaford, overlooking the famous La Conner Flats,” the chapter historian recounted.

At the celebration at the Skyline Beach Club in Anacortes Saturday, Susie Deyo appeared...