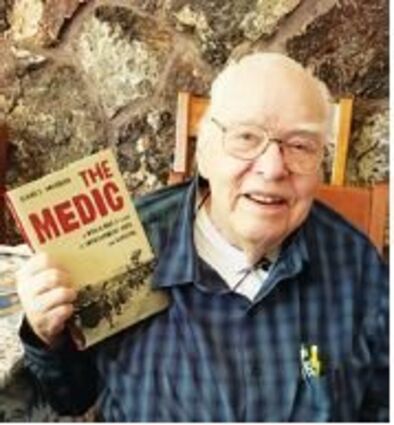 Henry was born in Morris Bluffs, Nebraska on June 6, 1922. He joined the U.S. Army on his birthday in 1940 and served as a surgical technician. He was stationed in the Philippines, as a medic, when World War II broke out, and was attacked and captured by the Japanese Imperial Army.

During his three and a half years in captivity he witnessed the Death March, was held in the infamous POW camp Cabanatuan, was transported to Japan in a Hell Ship, and spent the last months of the War providing slave labor in a Mitsubishi mine. Throughout that time, he never stopped treating the sick and wounded, with the few tools and medicines at his disposal.

When he was liberated and returned home, he met his sweetheart Dorothy Wunnenberg, who was a surgical technician with the Women Army Corps, while serving at Ft. George Wright, WA. They married Nov 14, 1947, at the Hollywood Palladium, CA. and were together nearly 60 years before she passed in 2007.

Henry reenlisted into the Air Force and retired in 1968 as a Senior Master Sergeant. After he retired, he went to Seattle University and earned his B.A. in medical records administration. He volunteered for several years at the Veterans Administration in Seattle and helped veterans and their families receive their full military benefits. He always quoted his motto: “I live to help those who cannot help themselves.”

Henry and his family would travel the world to Canada, Okinawa and the Philippines and the many states where he was stationed. Henry had many special interests and never lost his zest for life. He was a master at woodcarving and belonged to the Quilceda Wood Carvers and taught for many years. He won several awards for his various carvings. He was a member of the Snohomish County Search and Rescue Team and The Mountain Rescue Council of Seattle. He was an active member of the American Defenders of Bataan and Corregidor Memorial Society.

In 2017 he returned to Japan, with his daughter Rebecca Chamberlain of La Conner, as a guest of the Japanese Society of Friendship with POWs for a reconciliation visit. He was escorted by the Puget Sound Honor Flight in 2019 to Washington D.C. to visit the U.S. War Memorials.

His book, “The Medic,” by Claire Swedberg was released on June 1st, 2021, and chronicles his life in captivity during World War II. He had his debut book signing in La Conner, WA in June and was very proud of the dedication he and Claire committed to getting the story of his experience forever documented in history. “The Medic” is available at Seaport Books.

He was devoted to his family and was dearly loved by them all. He will be missed but has been reunited with his love. A private ceremony will be held at Floral Hills Cemetery and Tahoma National Cemetery at a later date.