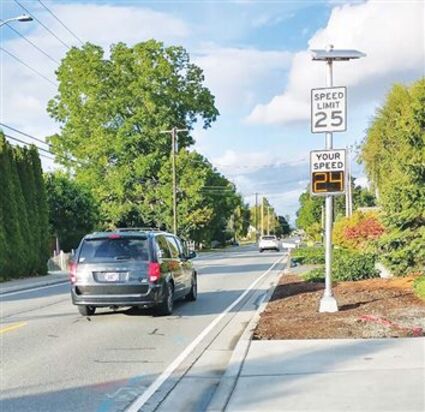 SLOW DOWN, YOU’RE MOVING TOO FAST – Watch your speed on every La Conner Street and get clocked heading north, as here past Caledonia Street, or south near Laurel Street on Maple Avenue or on North Third Street. Those signs are on either side of Basin Road. –Photo by Ken Stern

But, perhaps that was fitting, since the four digital reader boards are to slow traffic.

And they are doing the job – noticeably increasing road safety and driver speed awareness.

“I had one resident on North Third Street email me almost immediately after the signs went up and express how grateful they are for them,” Mayor Ramon Hayes told the Weekly News. “They’ve seen a significant impact already.”