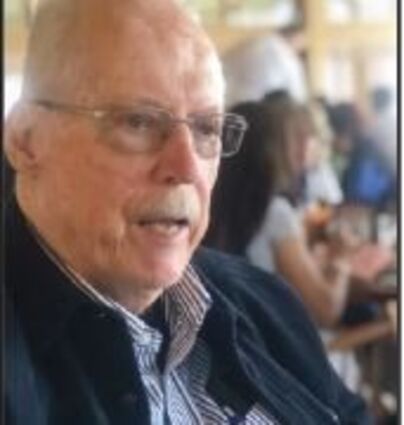 William “Bill” Malcomson was born in Cuba, NY to Rev. Clair E. Malcomson and Irene T. Lacy. Bill lived in many areas of the country in his lifetime; graduating from Denison University with a BA, from Colgate Rochester Divinity School with his Masters of Divinity, and from Princeton with a Ph.D. in the History of World Religions.

He was married to Laurie Loomis in 1955 at Seattle First Baptist Church and celebrated their 56th year of marriage prior to her pass-ing in 2011.

He was partnered with Barbara Bell for 10 years prior to her death.

Bill pastored in churches in Mansfield, Connecticut; Oakland, CA; Seattle, WA; and Greenwich Village, NYC. In 1963, he attended the March on Washington, where hearing the speakers including Dr.

In his later years, he spoke in his grand-children’s classrooms about how the experience had changed his life.

Bill delivered numerous guest sermons and contributed to many publica-tions, including his books The Preaching Event (1969) and Success is a Failure Experience: Male Liberation and the American Myth of Success (1976).

He was involved in the continuing education of ministers for many years and taught mainly preaching and church administration at Central Baptist Seminary in Kansas City, KS, and at the American Baptist Seminary of the West (now Berkeley School of Theology (BST)), where he rose to the role of Dean.

In conversation with pastoral and seminary leaders, he was able to facilitate the hiring of more wom-en, Black, Latinx, and Asian American faculty at BST and later at STM. Bill was involved in com-munity outreach; from human rights advocacy, LGBTQIA+ rights, and the support of gay clergy, to ef-forts in interfaith dialogue, especial-ly Buddhism and Christianity.

A notable collaboration was many years of work with the Council for Pacific Asian Theology, founded by Rev. Dr.

During his re-tirement, he worked with a group of clergy and academics to co-found the ecumenical side of the School of Theology & Ministry (STM) at Seattle University - named the Institute for Ecumenical Theological Studies, of which he was the Interim Director for the first year earning the infamous salary of$1.00 a year.

Bill and Laurie loved to travel and visited over 24 countries in their life-times.

He introduced Barbara to travel and they took a memorable trip to Turkey together.

Bill leaves behind a daughter, Christi, and sons, Scott (Becky) and John (Heidi), his much-beloved grand-children (Hannah, Grace, Will, Ben, and Sarah), and his step-family through his relationship with Barbara (Steve and Carolyn and their children).

He also left behind a community of friends and col-leagues, many of whom he counted as brothers and sisters and relished the roles of teacher/advisor/confi-dant through regular phone calls, occasional joyful visits, and his emails of “Bill’s Blog by the Bay”, started in 2016 while he and Barbara lived in Port Ludlow, con-tinuing with Christi’s assistance un-til his death.

His youngest, John, has said “Dad loved to dream, fol-low his dreams, and enjoyed en-couraging others to follow theirs.” He was greatly loved and will be greatly missed.

See the Seattle First Baptist Church’s website for the date of the Celebration of Life, which will occur no earlier than mid -September.

In lieu of flowers, donations can be made to: