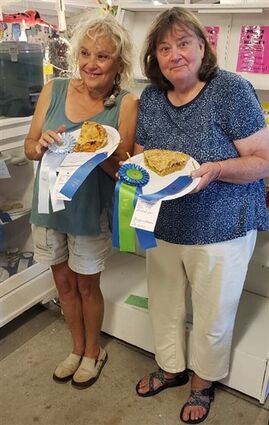 THE BLUES SISTERS AT THE FAIR – Maggie Wilder, left, credits her sister Georgia Johnson, right, as the guiding spirit, teacher and mentor behind her baking the peach pie that won a blue ribbon last week at the Skagit County Fair. Not to be outdone, Johnson entered a rhubarb pie. She won blue, too. – Photo courtesy of Gretchen Dykers

Every four years, Maggie Wilder finds herself weeping during the Olympics.

“I’m moved by the glory of it and that I never won anything,” she said. “I always wonder what that would feel like.”

Knowing that qualifying for the high hurdles was out of the question, Wilder suggested to her sister Georgia Johnson that they enter pies in the Skagit County Fair.

“I wanted to win something in a friendly competitive way,” said Wilder, “and what could be friendlier than the fair?”

When the judging was over, both sisters had earned a blue ribbon.