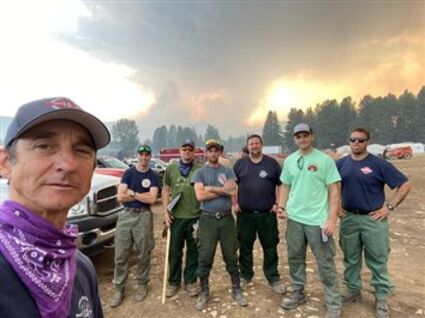 HALFWAY THROUGH A TWO WEEK SHIFT ‘OUT EAST’ – Fire District 13 Chief Wood Weiss sent this Aug. 2: “Preparing to go on shift with strike team at base camp in Winthrop with Cedar Creek Smoke plume in the distance. We have been working at night which is a blessing in this heat.” Weiss returned Aug. 7, after 16 days fighting eastern Washington fires. – Photo courtesy of Wood Weiss

I received the call on the morning of the 23rd of July to mobilize the tender and could not find anyone who would or could take the un-airconditioned beast to eastern Washington, so the job fell to me. Within hours I was headed to the Grand Coulee.

The first fire we fought was the Northrup Canyon Fire. We mostly did mop up of any hotspots. In fact, that is a common job of strike teams: to finish corralling the fire and making sure it does not re-kindle. This is why strike teams often jokingly refer to themselves as Mop-Shots as opposed to Hot Shots. There is always the chance though that a...