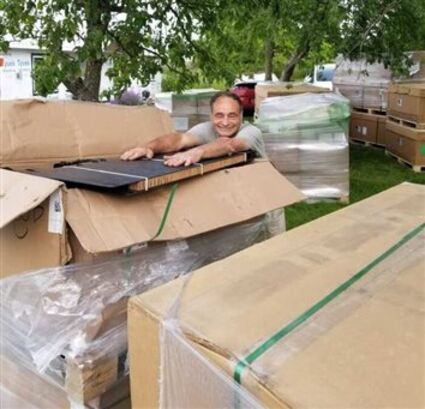 HE LOVES ALL THINGS TESLA – Valter Pavoni believes the future will be solar powered. He prefers Tesla products to drive him there. When the panels of his Tesla solar roof arrived, of course he hugged them in joy. – Photo courtesy of Eva Hagbrandt Pavoni

A few years back, Valter Pavoni bought some Tesla stock.

Then he named his new dog Tesla.

Next came a Tesla car.

Now, the Pleasant Ridge resident and his wife Eva are the proud owners of the first Tesla solar roof in Washington state.

A Tesla solar roof is made up of 15-inch x 45-inch tempered glass tiles. On the west and south sides of the Pavoni house, most, but not all, tiles contain photovoltaic cells that generate 12-volt DC power, which is converted to 120-volt AC power by inverters on the garage wall.

Slightly less than half of the tiles on the east side are PV but, to the visit...