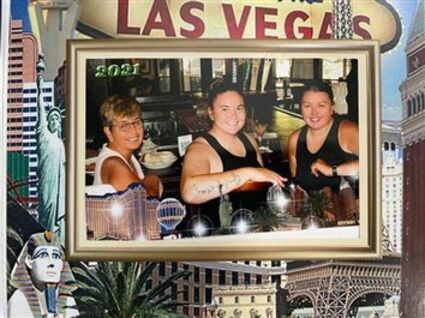 LIVING THE DREAM - Cathi Bassford, Lauren Reynolds and Katie Bassford during their recent trip to Las Vegas for the WNBA All-Star Game and exhibition between the Australian and U.S. Women’s Olympic Women’s Basketball Teams. – Photo courtesy of Lauren Reynolds

The top talent in women’s basketball from around the world was in Las Vegas last week.

So, too, were the sport’s best fans – including a contingent from La Conner.

Cathi Bassford, Katie Bassford and Lauren Reynolds were among those who flew to Vegas for the WNBA All-Star Game and an exhibition contest between the U.S. and Australian women’s Olympic teams.

The three are Seattle Storm season ticket holders. The team is among the most successful women’s professional hoop franchises, having won league titles in 2004, 2009, 2018 and 2020.