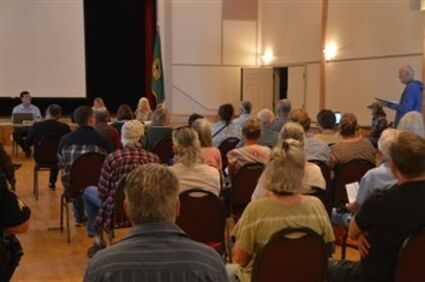 RESIDENT INTEREST IN NEW MAPLE AVENUE PARK UNABATED – Forty-five residents attended the July 13 town council meeting in Maple Hall. Public safety needs received a lot of attention, but preserving 100f Maple Park received the most passion and emphasis. Bob Raymond, standing, right, was one of many speakers that evening. A letter based on his remarks is on the letters page. – Photo by Ken Stern

Council was productive, passing three ordinances, but the public hearing on public safety and the unresolved status of the easement across the new Maple Avenue park next to the Landed Gentry 10 house subdivision dominated discussion at the start and close of the three-hour meeting.

Resident Linda Talman’s opening comment, that she had trouble hearing in the large hall, was a metaphor as well as literally true, as residents throughout the evening co...