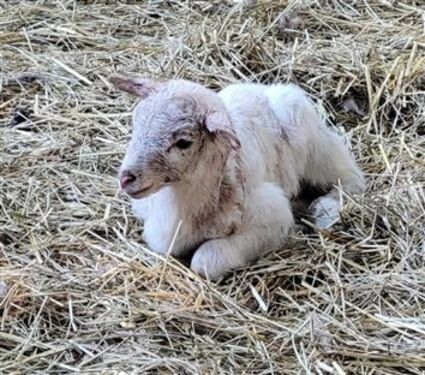 THIS IS WHAT INNOCENT AS A NEW BORN LAMB LOOKS LIKE – “Oh my gosh, couldn’t you have waited?” thought Anita Mesman when this lamb was born at 1 a.m. on the hottest night of the year. The new Mesman Farms resident weighed 10.25 pounds at birth and has since gained five pounds. Mother “Charlie” and baby “Junior” are both doing fine, Mesman reports. – Photo courtesy of Anita Mesman

For three or four days, Dean Swanson could hear the corn grow.

The corn he planted Saturday, June 26 was up four days later. Stalks that was already a foot tall doubled in a week.

“It was fun to watch things grow so fast,” he said. “Like they say in the Midwest, you could hear it!”

Meanwhile, Swanson’s raspberries took it on the chin. He estimates the heat bleached about 20 percent of his crop, mostly berries on the west side of north-south rows.

Kai Ottesen saw the same phenomenon at Hedlin Family Farms, on berries higher on the cane that did not have good leaf shading.