Businesses that expanded during pandemic 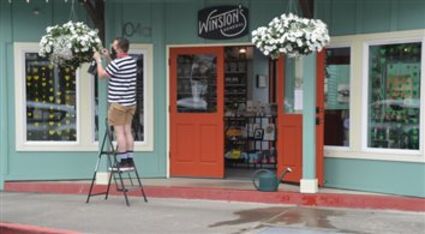 A WELCOMING OUTSIDE TO INVITE PEOPLE INSIDE – Ashton Tveter was watering and trimming the hanging baskets outside of Winston’s General on South First Street last Wednesday. Just like that it has been seven months since Robyn Bradley unveiled her new store. Doors are open: step inside. – Photo by Ken Stern

Some of the world’s best-known businesses started in depressions, recessions and other hard economic times.

Three La Conner businesses followed their example last year, expanding their operations while many others were retrenching or folding.

When Sempre Italiano relocated from the corner of First and Morris streets to the O’Leary building two blocks south, Robyn Bradley’s landlord asked whether she knew someone who could take over the space.

“Without really thinking, I said ‘oh my gosh, me!’” she recalled.