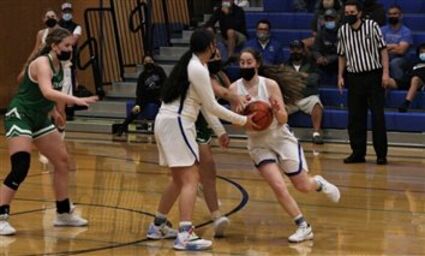 SPLITTING THE POST – La Conner’s Rachel Cram takes a handoff from Sarah Cook at the high post during the team’s 74-58 non-league win over 2A Lynden last Tuesday at Landy James Gym. Cram and Cook were two of five La Conner players to score in double figures. – Photo by Bill Reynolds

The La Conner High girls’ basketball team earned an A for effort in its close home loss to Burlington-Edison last Tuesday, June 8.

The Lady Braves received an A for results when they soundly defeated Lynden in another highly anticipated non-league hoop matchup, again at Landy James Gym two nights later.

Together, the hard-fought, highly competitive games proved that 2B La Conner could more than hold its own against top 2A foes from the vaunted Northwest Conference.