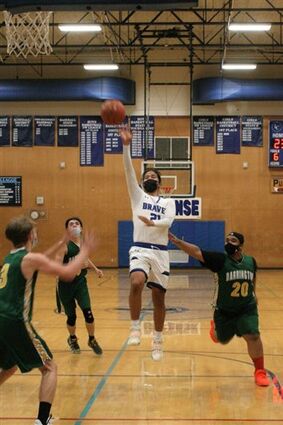 KEY BASKET – La Conner’s Elijah Porter drove into the key to knock down a floater as time expired in the first half of NW2B basketball action with Darrington at Landy James Gym last Friday. Porter’s buzzer beater gave the Braves a 25-22 lead at intermission and shifted momentum to La Conner. The hosts went on to post a 56-35 triumph. With the win, the Braves squared their season record at 2-2. – Photo by Bill Reynolds

Fancy passing was no mere passing fancy for the La Conner Braves during their first week of spring hoop action.

La Conner passed effectively both in transition and in its half-court offense, consistently finding open shooters, to post convincing NW2B home victories over Concrete and Darrington.

The Braves sped past Concrete 73-29 last Tuesday and used a second half surge to defeat Darrington 56-35 on Friday.

When at their best, the Braves patiently made the ext...