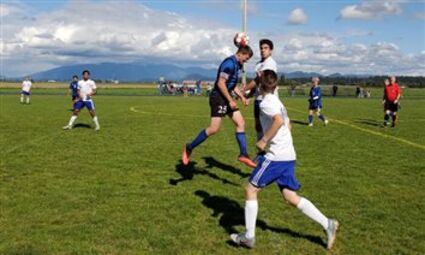 USING HIS HEAD – La Conner’s Mason Wilson (25) executes a header near the Braves sideline during second half action of league soccer action with Grace Academy at Whittaker Field on Friday. Wilson and the Braves held on for a 2-1 triumph in a contest that went to a final shootout round. – Photo by Bill Reynolds

The La Conner high boys’ soccer team closed out a shortened spring season with a win in their longest match of the campaign Friday.

Andre Knudson clinched a 2-1 Braves home triumph over Grace Academy of Marysville with a goal in the shootout round to break a 1-1 tie following 80 minutes of action and two five-minute overtime sessions.

Knudson was mobbed by his teammates, who rushed onto the field from their sideline following his game-winner,.