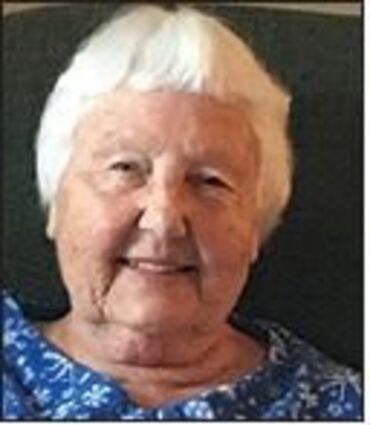 On April 26 our beloved Morrey Cort went on to a new adventure. Morrey loved adventures and was the most fun and enthusiastic nonagenarian you could ever meet.

Morrey moved to La Conner in 2007. She lived in Harbor Villa for a number of years until she had to move to Josephine Caring Community in Stanwood in 2018. Morrey became a celebrity there as she was always the life of the party. They even made a promotional video with her as the star, driving around in her scooter.

At one time Morrey volunteered at 7 different non-profits.

She especially loved cats and was a popular cat sitter for several friends.

She answered calls after hours for The Cat’s Meow in Anacortes and always relished when friends and neighbors brought their cat over for a visit.

Morrey was a breath of fresh air for tourists who came into the Visitor Center at La Conner Chamber.

“She was so friendly and helpful and pretty much knew each visitor’s life story by the time they left the office,” said Marci Plank.

The La Conner Senior Center was another place she volunteered, and Jana Gage remembers Morrey fondly as “one of the most upbeat and pleasant people” she has ever known.

She also volunteered with Friends of the Library and other non-profits in the area.

Morrey loved to dress up her car, a tiny white 1991 Toyota Tercel she named ‘Grace’. She spent hours decorating that car end to end for all parades in town. Waving at people along the route, throwing out candy for the kids.

Morrey was a fervent fan of ice skater Brian Boitano and followed him to the 1994 Olympics in Lillehammer, Norway. She traveled on her own to wherever she wanted to go. Even on a cruise through the Panama Canal when she was well into her 80’s. Or to Hawaii for her high school reunions.

Morrey knew the keyboardist in the Grateful Dead band and still had her backstage pass for several concerts. She knew Jerry Garcia and the rest of the band as well as meeting some of the backup bands that played with them.

She worked with Michael at the Gorilla Foundation, helping him with sign language. Michael called Morrey ‘Old Hair’ and was a companion of KoKo another famous gorilla in San Francisco.

Morrey was very proud to be a graduate of the Punahou School in Honolulu, a highly respected private school she was accepted to in 1940. During her senior year she was an eyewitness to the Japanese Attack on Pearl Harbor, with Japanese planes flying so low over her house “she believed she could have touched them” as they fired their machine guns.

The school yearbook described Morrey Green like this; “It didn’t take Morrey long to get into the swing of things: and where there is fun, you will find Morrey! With her sunny smile and sympathetic nature, she is everyone’s friend”. That sentiment held true her entire life and we are all better off for those who knew Morrey.

Donations can be made to the Town of La Conner Park Commission http://www.townoflaconner.org or to The Cat’s Meow in Anacortes www.meowanacortes.org/donate

Morrey leaves behind her daughter Shelley Alan and son-in-law Kerry Hartjen. There will not be a service, but a memorial bench will be placed in Conner Waterfront Park nearby where her tree is planted.