Mark Whitmore is on a journey to save east coast hemlocks 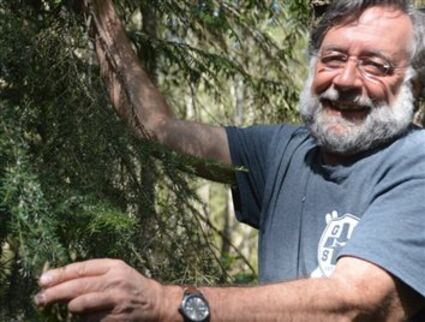 LOCAL BOY RETURNS HOME TO SAVE EASTERN HEMLOCKS – Cornell University entomologist Mark Whitmore, a native of Buckley, Washington has made La Conner his base since January while scouring the north Puget Sound region for the hemlock woolly adelgid (HWA) an aphid-like, invasive insect. He sends branches of infested hemlocks east so the HWA’s predators can be harvested and grown to become a biological control released to save eastern hemlocks. – Photo by Ken Stern

Driving or walking on Flagstaff Lane, off Snee Oosh Road near Kukutali Preserve, or walking the preserve, you may notice white fuzz on the underside of western hemlock tree branches, or you may not. But Mark Whitmore always notices. He has been hunting this fuzz, the hemlock woolly adelgid (HWA), an aphid-like invasive insect since January, a mission that has brought him from New York state the last 15 years. He lops and harvests infested branches and ships them back to his lab in New York.

The HWA is a west coast native but on the east coast is an exotic, imported over 100 years ago on Ja...