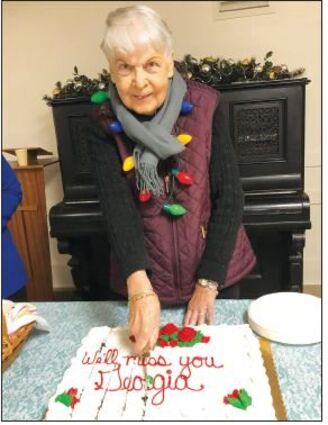 Georgia G. Powers passed away peacefully on March 8, 2021 at Providence St. John’s Hospital in Santa Monica, California with her children by her side.

Born during the height of the Great Depression on November 12, 1933 in Elgin, Illinois to George and Gladys Gabler, her father had to paint the hospital to pay for her delivery.

With two older brothers, Rod and Paul, Georgia learned quickly how to stand out.

Always a vivacious child, she excelled in school and was socially active from an early age participating in sports, debate club and cheerleading.

But when Georgia was only 16, her father died unexpectedly.

The sudden loss devastated her but also gave her a newfound strength that she carried with her for the rest of her life.

She received a full scholarship to Lake Forest College but left early to head west to Los Angeles, California with her mother, landing a job at Young and Rubicon and later at Atlantic Richfield.

There she met Sam Duran on a blind date and the two married in 1954.

Sadly, their first child Shelley died as an infant but soon after their twins Julie and David were born followed by a son Paul and later a daughter Sara.

The family moved to Orange County in the early 60s, first to Costa Mesa then to the Tustin Hills.

While raising her children was her first priority, with family road trips, water ski vacations and cheering on school and athletic activities, Georgia also took an active role in her local community, dedicating her spare time to PTA, Children’s Hospital of Orange County and Girl Scouts.

In 1978 she and Sam divorced and two years later she met and married Ray Powers. A few years later they moved to La Conner, Washington, building their dream home in Shelter Bay where they enjoyed a busy social life that included tennis, golf, boating and travel. She immediately immersed herself in her new community too, sitting on the Shelter Bay Community board, eventually becoming president and helping negotiate a new land lease contract. She also worked tirelessly to raise money for a new library for La Conner, with an annual fundraiser centered around the Skagit Valley Tulip Festival. She became well known for her talent to sell raffle tickets to anyone she met.

Six years ago she lost her beloved Ray and last year she moved back to Southern California to be near her children and grandchildren, settling in Santa Monica overlooking the Pier.

Despite the pandemic she was still able to see family and make new friends as she did wherever she went.

She loved to play bridge and watch tennis and enjoyed sitting in ‘Ray’s chair’ at night watching the lights on ‘her ferris wheel’ go round on the Pier.

She was an irreplaceable spirit, a funny, feisty, strong woman who kept everyone in stitches while playing cards with several generations of family and friends.

She is survived by her four children plus numerous grandchildren, great grandchildren and stepchildren, many who knew her simply as G.G.

In lieu of flowers we ask that donations be made to her beloved La Conner Friends of the Library.

She was much loved and will be missed.